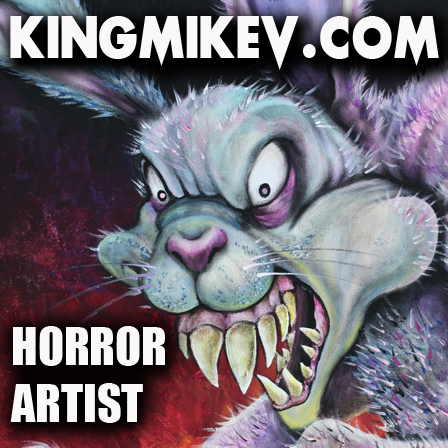 King Mike V's knuckles say it all, "DON"T STOP", encompassing a lifetime of determination and persistance in bringing his talents to showcase to the world.  Having been involved in art since the age of 5, and utilizing all types of medium from charcoal to oil painting, from airbrush to sculpting, from spray cans to mask-making, it seemed that tattooing would one day also be a natural progression.  King Mike V, also known as Mike Vanderhoof, began tattooing in 1992 and opened his own parlor, Dr. Package Tattoo in 2001.  After a decade of decadence, and traveling nationwide on the tattoo convention circuit, boasting many trophies and magazine articles, Mike decided to close the doors of Dr. Package Tattoo in late 2010 to pursue his music career and other aspirations.  King Mike V's music career began at the age of 17, co-founding the hip hop group "The Labrats" with his friend and fellow rhymer EMC (r.i.p.).  The group disbanded early after cutting a self-titled EP with producer Cory Yothers of Bellmark / Featherstone.  After a short hiatus, King Mike V moved on to a solo project which his then-manager was in talks with Capitol Records to release it. But in time, the deal fell through and King Mike V proceeded on once again.  In 1997, Mike joined the rap/metal group "Dr. Package" as lead vocalist and frontman, bringing his hip hop roots along with him.  Dr. Package released their debut album "Kings" to rave reviews, and also had a follow up EP entitled "Earthquake Weather".  After playing live relentlessly at nearly every southern california rock venue, appearing on TV and even aired on KROQ, Dr. Package became a hugely popular local act. The band had a mutual break-up around 2002. At this point, King Mike V decided to get back to his hip hop foundation and built his first pre-production studio where he could focus on his new found love for beat-making.  Along with friends, Melk $$$$, GS9, and DJ IMmackuliT, they formed the hip hop group "Word Assoc."  The group recorded 3 albums together, the first was self-titled, followed by "This is War" and "The Awful Truth".  As the project began to lose steam, King Mike V then teamed up with DJ IMmackuliT and released 2 more albums, "Our Finest Hour" and "Grindhouse".  Mike is also a member of the international hip hop crew known as The CCC or "The Cross-Continent Crew", which is a worldwide hip hop alliance of lyricists, producers, and Dj's which has members all over Europe, The U.S., Canada, and South America.  In September of 2010, King Mike V launched "The King Mike V Radio Show" an hour-long weekly internet radio program broadcasting worldwide, which aired every Saturday 3:30pm PST on www.cultradioagogo.com.  The show, along with co-hosts Chuck U. Farlie and JD, gave a weekly platform to 2 of King Mike V's passions: horror films and underground hip hop.  In addition, King Mike V is currently writing his first horror film screenplay, and continues to tattoo on the U.S. convention circuit and can also be found at periodic Horror Conventions promoting his art. So keep checking back here at KINGMIKEV.COM to see when King Mike V is coming to a city near you.

New Cult of the Great Pumpkin “Moon Phases” t-shirt now available at ShopSinister.com – just search “Moon Phases” for a variety of shirts and hoodies with this design!

New t-shirt design “Jack Attack” now available at ShopSinister.com! I had this idea months ago and finally pulled the trigger on it. With love and respect to the first movie that ever truly terrified me.

Get 20% OFF orders of $20+ with coupon code HALLONTINE thru midnight on 2/7! Looking for a Hallontine’s Day gift for that special spookster in your life? ShopSinister.com has you covered! Artwork, apparel, pins, patches, stickers and more, all ready and waiting to impress your paranormal paramour at https://www.shopsinister.com! 💲 AFTERPAY! ShopSinister.com now features AFTERPAY! Here’s how it... Read more »

The post Hallontines Day Sale at ShopSinister.com – Get 20% OFF orders of $20+ Thru 2/7! appeared first on Cult of the Great Pumpkin.

Creatures of the night awaken for this years Halloween Monster Marathon hosted by Malvolia: The Queen of Screams. Strap in for more freaky flicks with a new batch of indie directors. Spooky tales such as a Halloween celebration turned deadly in “A Samhain Liturgy”, and something unholy in the basement desires a nun in “Sister... Read more »

The post 10/31 Part II Now Available to Order on Blu Ray appeared first on Cult of the Great Pumpkin.

The post Haunted Mask Hangers Coming from Trick or Treat Studios appeared first on Cult of the Great Pumpkin.